A leader of different denomination who stopped here was David Gold of Goldsboro. He was a minister of the Missionary Baptist Church and started publishing "Zion's Trademark." One of his sons established the Wilson Daily Times and two other sons founded the Jefferson Standard Life Insurance Co.

In the wintertime the Inn's business was mainly form drovers, farmers who from the early 1800's until the coming of a railroad into Asheville in 1880, drove great herds of cattle and hogs, flocks of turkeys, and horses and mules from Kentucky and Tennessee to the plantation country of the south.

Like other tavern keepers Bedford Sherrill kept plenty of corn on hand to feed the animals that were boarded with him overnight. Corn, during pre-civil war days was purchased for about 50 cents a bushel by the tavern keepers and sold to the drovers for 75 cents, netting a nice profit. Sherrill also sold oats, fodder and "diet," which included a man's overnight lodging and meals. "Diets" in 1859 were 25 cents.

The advent of a flock of turkey could be determined, in dry weather, by the clouds of dust they raised. Drivers, waling beside them, waved sticks with strips of red flannel tied on the ends to keep the birds in line, and care had to be taken to arrive at the Inn before sundown, or they would head for the nearest trees and roost.

With the coming of the railway to Asheville and the dwindling of the drover trade, the type of guest at the Sherrill's changed. There was a steady group of tourists that found Asheville a pleasant resort area. There were also more and more residents of Asheville, who made the outing to Chimney Rock by the Inn on a much-improved road.

There were also commercial travelers, prominent among them being Moses Cone of Baltimore. The names of J. B. Ivey, founder of Ivey chain, and of S. Lipinsky, the founder of Bon Marche, are also listed.

John P. Arthur, the historian, was often a visitor during this period. Apparently inclined to over-indulgence in drink, on one occasion he signed himself "J. P. Arthur Ð Sober!"

Another guest of the late 19th century was Frank M. Jordan, memorable in that he headed a posse that captured Will Harris, a Negro desperado who went wild in Asheville in 1906, killing two policemen and three Negroes.

Charles Dudley Warner, the essayist, editor and novelist, made a visit to Sherrill's, accompanied by his friend, T. R. Lounsberg, a professor of English at Sheffield Scientific School.

There were also others whose lives are linked to Western North Carolina: Robert Bingham, later U.S. Ambassador to England; Hall Fletcher, a physician for whom the Hall Fletcher School is named; C. D. Beadle, who directed the landscaping of the Biltmore estate; H. J. Sage, who designed the seal of the city of Asheville; Colonel Frank Coxe, builder of the Battery Park Hotel; General Theodore F. Davidson, Attorney General for North Carolina from 1889 to 1983; and N. A. Reynolds, chairman of the Buncombe County commissioners, who was both uncle and step-father of Senator Bob Reynolds. Many more are listed whose descendants lived in and around Asheville.

One of the interesting side-lights revealed to present-day readers of Sherrill's registers is the old place names in this area. Swannanoa was at one time called "Cooper's" and Biltmore was named "Best" for the man who bought the Western North Carolina railroad. Before the coming of the Champion Paper Co., Canton was known as "Pigeon's River." Arden was formerly called "Shufordsville."

Old maid Molly Sherrill and her two old bachelor brothers sold their home in 1909 and moved to Swannanoa, leaving the Inn's registers behind. It is fortunate that, although there was then no law compelling them to do so, the Sherrills kept such a record. A history of our country is written in its pages. 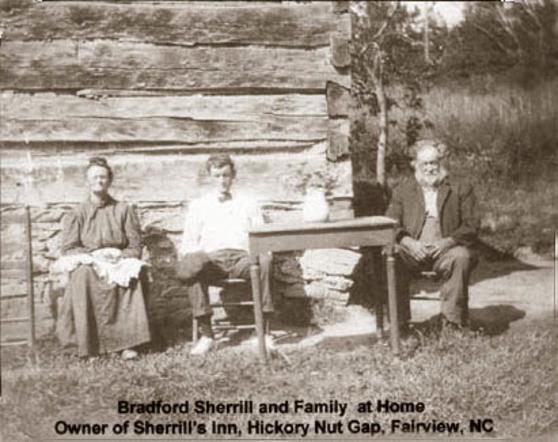 Sherrill's Inn Was Host to Many Famous People​​

Reprinted from The Fairview Town Crier

High on a sloping shoulder of Ferguson's Peak, cradled in a cloud-tipped grove of tulip poplars, and overlooking the fertile valley reaches of Hickory Nut Gap stands a large white T-shaped frame house, once Sherrill's Inn, for 75 years host to the stage coach and drover travel whose constant eddy between Tennessee, Kentucky and the coastal Carolinas is written into the pages of registers preserved there since 1840. History, like an autumn frost, mantles the house and grounds.

It speaks through mediums as massive hand-hewn timbers, an oversize kitchen fireplace of native stone, large enough to roast a calf, windowpanes rippling with hand-blown glass, and a block house of heart poplar logs, six inches thick, chinked for Indian fighting. Its tale is told by towering virgin trees of aspen and walnut, walkways of boxwood 15 feet high, and a vegetable garden, outrageously prolific as a result of applications of ashes, dishwater and stable manure onto the same spot for over a hundred years.

Two Presidents of the United States have rested here, and, during the Civil War, Union troops repulsed at the site of Swannanoa tunnel, stopped for refreshment during their retreat. According to family tradition, Mrs. Sherrill, the innkeeper's wife and a southern sympathizer, emptied the dirt from her shoes on the eggs she was forced to fry for the soldiers' breakfast, while the rest of the family covered their hams with sheets and hid them in the thick walls of the Sherrill's bedroom. Their watches [which were] placed on the setback ledges in the eaves of the room, were discovered.

Now the home of James McClure Clarke and their family, this property was originally purchased from the government by John Ashworth in 1806 for the sum of fifteen shillings per hundred acres, or a half a shilling an acre. The deed for this transaction hangs in the upstairs hall. Ashworth built a three-room cabin, resided there till 1834, when he sold his holding to Bedford Sherrill. Sherrill and his family lived in the cabin, added a two-story frame structure onto it to accommodate guests, covered the whole with narrow clapboard, and went into business. Except for minor structural changes made by Mrs. Clarke's parents, the James G. K. McClures who previously owned the property, the building is essentially the same today.

Time has been a kind friend to this hospitable house. Its outlines softened by moss, wisteria and ivy, its board and brick weathered and mellowed by years, it appears otherwise just as it was described during the time when Bedford Sherrill stood on his front porch and, as was his custom refreshed wary travelers with apple brandy made from the fruit of his orchard.

Physically, the house resembles a T, with the addition of the porch to its south and east sides. Curving columns and banisters and rails on the porch are hand made. A twin outside stairway leads to the doorway of the second story, its only entrance in the olden days, excepting an indoor ladder for household convenience. A narrow, curving stairway now replaces the ladder.

Five guest bedrooms on the first floor have been reapportioned. The original bedrooms were small, constructed in the manner of sections of a Pullman car without an aisle, each opening into another, so that the occupant of the fifth bedroom was forced to pass through the remaining four on his way to the tap room, not the living room. Records tell that a visit to the taproom was worth the trouble.

Most interesting at the back of the house, the original cabin, [is] a small room where the drovers slept communally, a study, once a bedroom for the Sherrills, paneled in hand-planed beaded chestnut, unstained, and aged darker than mahogany, and the old kitchen, its fireplace eight-feet wide, whose iron cranes for cooking are still usable. A modern kitchen has been added.

At the back of the house a spring-house of ancient chestnut construction from which flow water of an ebullient mountain spring, and upstairs, except for the addition of bathrooms, the floor plan is much as it was in the last century. Bedrooms open into each other, window sizes vary along each wall in accordance with the disparate heights of the porch roof. No two doors have identical measurements.

Throughout the dwelling floors and heart pine, original brass and iron door locks are in use, and furniture is colonial. Wall paneling is all-indigenous excepting the music room, when panels bespeak the talent of the late Mrs. McClure, a finished artist. Murals painted by her in oil of colors so soft as to give the appearance of English watercolor paper, depict varying scenes about the house during the time it was a hostelry.

Sherrill's daughter, Molly was cook, and according to a breakfast menu recorded by a guest, set and appetizing and abundant table.

The early guests at the Sherrill's Inn were an assort[ment] of traveling preachers, lawyers, presidents, politicians, and many prosperous families from Charleston and the East coming to the mountains to enjoy the cool summers.

The flow of important guests through the pages of the Inn's registers is surprising. Millard Fillmore and Andrew Johnson, both Presidents of the United States, were overnight visitors. Other political leaders who stopped here included A. S. Merrimon, a U.S. Senator from North Carolina from 1873 to 1879, and later Associate Justice and Chief Justice of the North Carolina Supreme Court; Zebulon B. Vance, a Governor and U.S. Senator, and George Davis, a Wilmington attorney, who served as attorney general of the Confederacy in 1864 and 1665.

Other visitors of prominence included F. W. Pickens of Edgefield, S. C., U.S. Minister to Russia from 1857 to 1860, the first Governor of South Carolina after that state seceded from the Union; Henry E. Colton, chronicler of the Western North Carolina mountains; and D. H. Jacques of Charleston, author of many books and editor of an agricultural magazine, "The Rural Carolinian." Also, Walter L. Steele of Richmond, N.C., who was secretary of the North Carolina Succession Convention in 1861, and Charles Edward Bechtler, one of the remarkable Germans who minted gold coins near Rutherfordton.

Two young ladies who stayed at Sherrill's during the 1850s registered as "Miss M. A. Morrison" and "Miss Eugenia Morrison" of Cottage Home, N.C. They were the daughters of the Rev. R. H. Morrison, one of the early presidents of Davidson College. Mary Ann Morrison later became Stonewall Jackson's second wife.

Another visitor at this time was Dr. W. L. Hilliard, a well-known Asheville physician and ardent Democrat, who was one of the principals in the last duel fought in Western North Carolina.

Among the churchmen who stopped at the inn, the most prominent were Bishop Ives of Raleigh, who established the Episcopal mission at Valle Cruces, and Bishop Atkinson, his successor, who was an important factor in bringing about reconciliation between Episcopal churches in the south and the north after the Civil War. 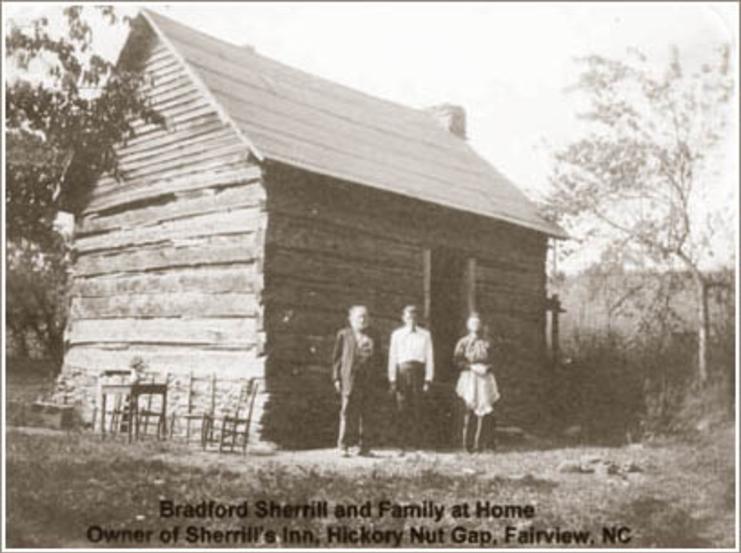 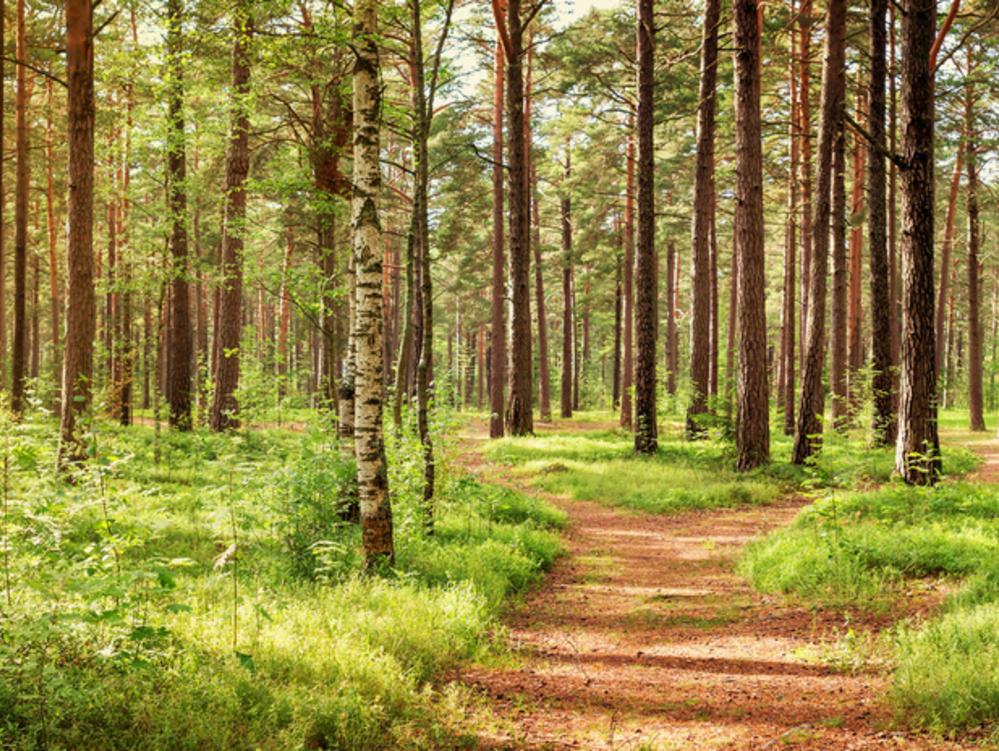